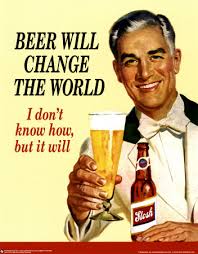 With the Super Bowl, and more importantly Super Bowl commercial having just saturated the zeitgeist (there’s a good blog word), Slate magazine has a brilliant analysis on why beer commercials are the way they are.

So brilliant is this analysis that I offer it up to you as my extra special Super Bowl present.

Scocca : Beer Commercials Are Not Stupid

What are beer commercials about? The two central premises are these:

1. Beer—cheap, common, domestic beer—is a rare commodity that drives men mad with the desire to have it, at any cost.

2. Women are the great obstacle between men and the fulfillment of this desire.

Taken literally, this is baffling. Beer is cheap and easy to find. The only cost should be $6.99 for a six pack, at any convenience store. And rather than hiding from women to drink their beer, many single adult heterosexual men seek out female company when they\’re drinking. \”Drink our beer and avoid contact with women!\”—who could possibly be the target for that pitch?

But it makes perfect sense if the target audience is—and it is—16-year-olds.

The girls aren\’t really girls; they\’re Mom. And Mom is the first hurdle in the thrilling obstacle course that makes up the world of the teenage beer drinker.